Some people believe Finnish to be a hard language to learn. However, most of the difficulty comes from the fact that Finnish is very different from other European languages. This different logic can be hard to understand. But Finnish is not inherently a very hard language. For instance, where in English you would learn a preposition, in Finnish you learn a case inflection. It’s not harder - it’s just different. It also has very regular spelling - no exceptions - and very beautiful pronunciation. In this article, you can see an overview of Finnish grammar that can give you a general understanding of what it is like and what you will need to pay attention to when learning.
< Learn Finnish

The Finnish language does not distinguish gender in nouns or even in personal pronouns: hän is 'he', 'she' or 'it' depending on the referring party. There are no articles, neither definite nor indefinite. Thus, to get an accurate translation, context is often needed.

As in other Uralic languages, locative cases in Finnish can be classified according to three criteria: the spatial position (interior or surface), the motion status (stationary or moving), and within the latter, the direction of the movement (approaching or departing).

There are three different plurals in Finnish: nominative, the form used after numerals, inflected plural. After numerals greater than one in the nominative singular, the noun is put in the partitive (one of the cases) singular. Otherwise, the noun and the numeral agree with each other in number and case.

Adjectives in Finnish are inflected in exactly the same way nouns are, and an adjective must agree in number and case with the noun it is modifying. For example:

The comparative of the adjective is formed by adding -mpi to the inflecting stem.

The superlative of the adjective is formed by adding -in to the inflecting stem.

A very common way of forming adverbs is by adding the ending -sti to the inflecting form of the corresponding adjective.

The pronouns are inflected much in the same way that their referring nouns are.

Finnish verbs are usually divided into seven groups depending on the stem type. All seven types have the same set of endings, but the stems undergo (slightly) different changes when inflected. There are very few irregular verbs in Finnish.

Finnish does not have a separate verb for possession (compare English «to have»). Possession is indicated in other ways, mainly by genitives and existential clauses.

koiralla on häntä - the dog has a tail (literally «on the dog is a tail», or in English grammar, «There is a tail on the dog»)

For instance, the Finnish passive is unipersonal, that is, it only appears in one form regardless of who is understood to be performing the action.

It can also be said that in the Finnish passive the agent is always human and never mentioned. A sentence such as «the tree was blown down» would translate poorly into Finnish if the passive were used, since it would suggest the image of a group of people trying to blow the tree down.

There are four moods in the Finnish language: indicative, imperative, conditional, and potential.

Since Finnish is an inflected language, word order within sentences can be much freer than, for example, English. In English, the strong subject–verb–object order typically indicates the function of a noun as either subject or object although some English structures allow this to be reversed. In Finnish sentences, however, the role of the noun is determined not by word order or sentence structure as in English but by case markings that indicate subject and object.

The most commonly used neutral order, however, is subject–verb–object. Usually what the speaker or writer is talking about is at the head of the sentence.

Postpositions indicate place, time, cause, consequence or relation. In postpositional phrases, the noun is usually in the genitive.

pöydän alla - under the table

There are few important prepositions in Finnish. In prepositional phrases, the noun is always in the partitive.

Some postpositions can also be used as prepositions.

This is a very brief overview over the Finnish grammar. To truly master it, you will need to study each of the parts of speech in much more detail. However, this overview will hopefully give you a general idea of the Finnish grammatical system and the main points you should consider when learning. 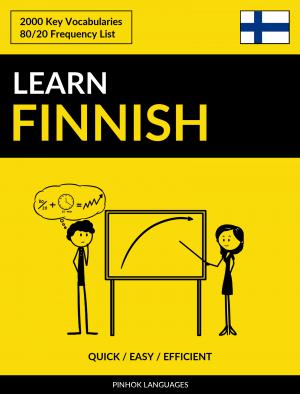 This vocabulary book is a curated Finnish word frequency list with 2000 of the most common Finnish words and phrases. Following the Pareto principle (80/20 rule), this book is built to streamline the learning process by concentrating on the core words and sentence structures. The result is a unique book ideal for driven learners and language hackers.
Learn More 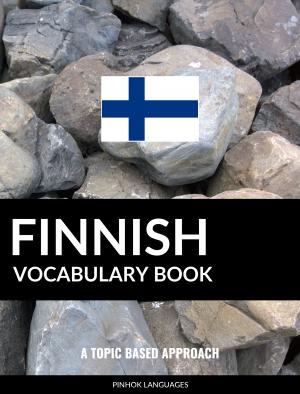 This Finnish vocabulary book contains more than 3000 words and phrases and is organized by topic to make it easier for you to pick what to learn first. It is well suited for learners of all levels who are looking for an extensive resource to improve their vocabulary or are interested in learning vocabularies in one particular area of interest.
Learn More

At Pinhok Languages we concentrate on vocabulary acquisition through vocabulary books and flashcards. To provide you with an additional option, we have partnered with finnishpod101.com. By clicking on our partner link you can sign up for a free account and start learning using various formats like audio, video, flashcards, articles and even 1:1 teaching.
Learn More