Icelandic retains many grammatical features of other ancient Germanic languages and resembles Old Norwegian before much of its fusional inflection was lost. It may seem complicated and daunting at first, but in fact, it is not as hard as it seems. This article is an overview of Icelandic grammar which will give you a general idea of its logic and main aspects.
< Learn Icelandic

Icelandic nouns can have one of three grammatical genders: masculine, feminine or neuter. There are two main declension paradigms for each gender: strong (i.e. root ending in consonant) and weak (root ending in a vowel) nouns, and these are further divided into subclasses of nouns, based primarily on the genitive singular and nominative plural endings of a particular noun.

The gender of a noun can often be surmised by looking at the ending of the word:

The examples below show three nouns, one for each respective gender, declined in the nominative:

The independent or free-standing definite article (not attached to the noun as a suffix) exists in Icelandic in the form hinn. It is mostly used in poetry and irregularly elsewhere (there are hardly any rules for the latter case; it is mainly a matter of taste).

Adjectives in Icelandic must agree with the gender, number and grammatical case of the nouns they describe.

Compared to other lexical categories, Icelandic adverbs are relatively simple and are not declined, except in some cases for comparison. They can be constructed easily from adjectives, nouns, and verbs. These derived adverbs often end in -lega (approximately equivalent to the -ly suffix in English):

The adverbs ending in -lega can be declined for comparison.

Like in English, many common adverbs do not stick to these patterns but are adverbs in their own right:

Personal pronouns in Icelandic are declined in the four cases and for number in the singular and plural.

Icelandic has separate masculine, feminine and neuter words for they. When talking about a group of mixed gender people or items, the neuter form is used.

Verbs are conjugated for tense, mood, person, number, and voice.

There are three voices: active, passive and middle (or medial), but it may be debated whether the middle voice is a voice or simply an independent class of verbs of its own. Examples are koma ("come") vs. komast ("get there"), drepa ("kill") vs. drepast ("perish ignominiously") and taka ("take") vs. takast ("manage to"). In each of these examples, the meaning has been so altered, that one can hardly see them as the same verb in different voices.

There are four moods in Icelandic: indicative, imperative, conditional, and subjunctive.

Strictly speaking, there are only two simple tenses in Icelandic, simple present and simple past. All other tenses are formed using auxiliary constructions (some of these are regarded as tenses, others as aspects). For example, the present continuous is formed like this:

The basic word order in Icelandic is subject – verb - object. However, as words are heavily inflected, the word order is fairly flexible and any combination may occur in poetry: SVO, SOV, VSO, VOS, OSV, and OVS are all allowed for metrical purposes.

However, as with most Germanic languages, Icelandic usually complies with the V2 word order restriction, so the conjugated verb in Icelandic usually appears as the second element in the clause, preceded by the word or phrase being emphasized.

In Icelandic, prepositions determine the case of the following noun. For example, um (about) requires the use of the accusative case, af (of) - dative, til (to) - genitive.

Some of the most common Icelandic adjectives are: um, gegnum, að, af, frá, hjá, til, án, milli, á, eftir, fyrir.

This is a very brief overview of Icelandic grammar. To truly master it, you will need to study each of the parts of speech in much more detail. However, this overview will hopefully give you a general idea regarding the Icelandic grammatical system and of the main points you should consider when learning. 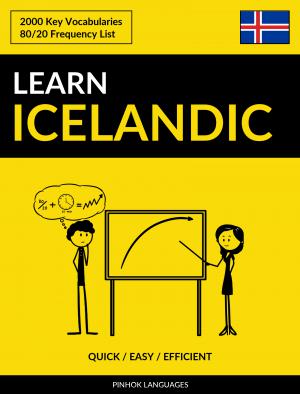 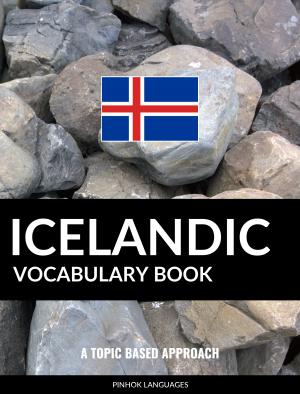