The Italian Alphabet, l’alfabeto italiano, has 21 letters. These letters are all shared by the English alphabet as both English and Italian use the Latin script, but the letters are not pronounced the same way.
< Learn Italian

The Italian alphabet has five vowel letters, (a e i o u). Of those, only a represents one sound value while each of the others has two. In addition, e and i indicate a different pronunciation of a preceding c or g.

Normally, c and g represent the plosives /k/ and /ɡ/, unless they precede a front vowel (i or e) when they represent the affricates /tʃ/ and /dʒ/ respectively.

In addition to being used to indicate a hard c or g before front vowels, h is also used to distinguish ho, hai, ha, hanno (present indicative of avere, 'to have') from o ('or'), ai ('to the', m. pl.), a ('to'), anno ('year'); since h is always silent, there is no difference in the pronunciation of such words. In loanwords such as hovercraft /ˈɔverkraft/, the h is still silent.

The acute accent (´) may be used on é and ó to represent close-mid vowels when they are stressed in a position other than the default second-to-last syllable. This use of accents is generally mandatory only in the final syllable; elsewhere, accents are generally found only in dictionaries.

The grave accent (`) is found on à, è, ì, ò, ù. It may be used on è and ò when they represent open-mid vowels. The accents may also be used to differentiate minimal pairs within Italian (for example pèsca 'peach' vs. pésca 'fishing'), but in practice, this is limited to didactic texts.

The circumflex accent (^) can be used to mark the contraction of two vowels, especially a double, final ii may become î.

In general, Italian pronunciation is quite phonetic and straightforward with only a few exceptions. 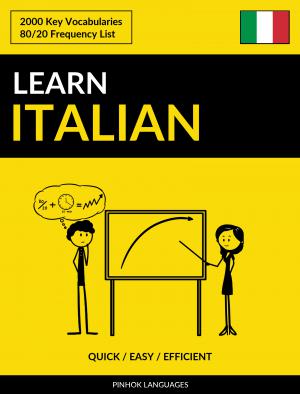 This vocabulary book is a curated Italian word frequency list with 2000 of the most common Italian words and phrases. Following the Pareto principle (80/20 rule), this book is built to streamline the learning process by concentrating on the core words and sentence structures. The result is a unique book ideal for driven learners and language hackers.
Learn More

This Italian vocabulary book contains more than 3000 words and phrases and is organized by topic to make it easier for you to pick what to learn first. It is well suited for learners of all levels who are looking for an extensive resource to improve their vocabulary or are interested in learning vocabularies in one particular area of interest.
Learn More

At Pinhok Languages we concentrate on vocabulary acquisition through vocabulary books and flashcards. To provide you with an additional option, we have partnered with italianpod101.com. By clicking on our partner link you can sign up for a free account and start learning using various formats like audio, video, flashcards, articles and even 1:1 teaching.
Learn More