Many people find the Korean language relatively easy to learn, especially compared to other Asian languages. However, there are quite a few peculiarities in Korean grammar that may cause difficulties and need to be studied hard. This article will give you an overview of the key notions in Korean grammar to give you the idea of what you should focus on learning.
< Learn Korean

Korean nouns do not have grammatical gender. As for the category of number, they can be made plural by adding the suffix 들 deul to the end of the word but in general, the suffix is not used when the plurality of the noun is clear from the context.

The most basic, fundamental Korean vocabulary is native to the Korean language, e.g. 나라 (nara, country), 날 (nal, day). However, a large body of Korean nouns originates from the Korean pronunciation of Chinese characters e.g. 산(山) san, “mountain”, or 역(驛) yeok, “station” and others.

Korean postpositions, or particles, are suffixes or short words in Korean grammar that immediately follow a noun or pronoun. They are also sometimes called case markers.

Postpositions come after nouns and pronouns and are used to indicate the role (subject, object, complement, or topic) of a noun in a sentence or clause. For example, -uy 의is used to denote the genitive case.

Korean pronouns are highly influenced by the honorifics (see further in the article) in the language. This means the forms of the pronouns change depending on the social status and level of seniority of the person you are speaking to.

For example, the pronoun for "I" there is both the informal 나 (na) and the honorific/humble 저 (jeo).

There are basically no pure third-person pronouns in Korean. Instead of pronouns, personal names, titles, or kinship terms are used to refer to third persons in both oral and written communication.

Korean numerals include two regularly used sets: a native Korean set and a Sino-Korean set, nearly entirely based on the Chinese numerals. The distinction between the two numeral systems is very important. Things can be counted with one of the two systems, but seldom both.

Korean gwanhyeongsa are known in English as "determiners," "determinatives," "pre-nouns," "adnouns," "attributives," "unconjugated adjectives," and "indeclinable adjectives." Gwanhyeongsa come before and modify or specify nouns, much like attributive adjectives or articles in English.

Verbs in the Korean language come in the last place in a clause. Verbs are the most complex part of speech, and a properly conjugated verb may stand on its own as a complete sentence.

Korean verbs are typically classified into four categories: action, state (or description), existential, and the copulas.

The distinction between action verbs and descriptive verbs is visible in verb conjugation in a few places. The copulas conjugate like stative verbs, but the existential verbs conjugate like action verbs. Some verbs can be either stative or active, depending on the meaning.

Korean verbs are conjugated. Every verb form in Korean has two parts: a verb root plus a sequence of inflectional suffixes. Verbs can be quite long because of all the suffixes that mark grammatical contrasts (there can be up to seven suffixes attached to a verb).

Derivational endings are attached directly to the verb root and are followed by the tense suffixes. These endings include those demonstrating valency and subject honorifics.

Following the derivational endings, Korean verbs can contain up to three suffixes in a row which represent a combination of tense, aspect, and mood.

For example, the future suffix is -keyss 겠 -get, often used to describe future events. It is used, when the speaker has valid reasons to believe something will be certain to happen. For instance, the suffix is used in broadcasting contexts in Korean such as weather forecasts.

These suffixes include suffixes denoting mood, formality, and politeness.

Sentences in Korean follow the subject-object-verb pattern. Verbs are typically the last element in a Korean sentence, and the only one necessary. That is, a properly conjugated verb can form a sentence by itself. The subject and the object of a sentence are often omitted when these are considered obvious in context.

When talking about someone superior in status, a speaker or writer usually uses special nouns or verb endings to indicate the subject's superiority.

This is a very brief overview of Korean grammar. To truly master it, you will need to study each of the parts of speech in much more detail, especially the complex verb and verb suffixes system. However, this overview will hopefully give you a general idea of the Korean grammatical system and of the main points you should consider when learning. 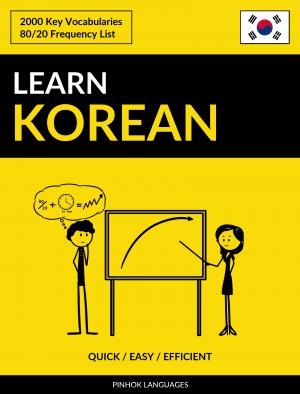 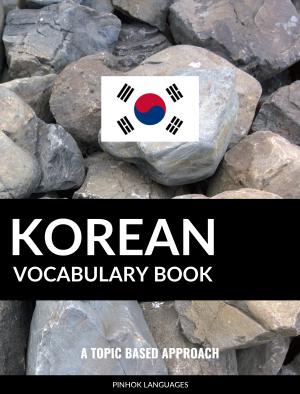 At Pinhok Languages we concentrate on vocabulary acquisition through vocabulary books and flashcards. To provide you with an additional option, we have partnered with koreanclass101.com. By clicking on our partner link you can sign up for a free account and start learning using various formats like audio, video, flashcards, articles and even 1:1 teaching.
Learn More