Some believe Norwegian grammar to be one of the easiest among all Germanic languages. Nonetheless, it still needs to be studied carefully if you want to master the language. This article gives an overview of the main features of Norwegian grammar to give you a general understanding of the system and of what you need to pay attention to when learning.
< Learn Norwegian

Norwegian nouns are inflected for number (singular/plural) and for definiteness (indefinite/definite). In a few dialects, definite nouns are also inflected for the dative case.

Norwegian nouns belong to three noun classes (genders): masculine, feminine and neuter. All feminine nouns can optionally be inflected using masculine noun class morphology in Bokmål due to its Danish heritage. In comparison, the use of all three genders (including the feminine) is mandatory in Nynorsk.

In general, the genitive case has died out in modern Norwegian and there are only some remnants of it in certain expressions: til fjells (to the mountains), til sjøs (to the sea). To show ownership, there is an enclitic -s similar to English -'s; Sondres flotte bil (Sondre's nice car, Sondre being a personal name). There are also reflexive possessive pronouns, sin, si, sitt, sine.

In theory, the female gender does still exist in Bokmål, but in practice, it is rarely used and the feminine nouns, as mentioned previously, are inflected like masculine nouns, i.e. add -en instead of -a for the definite form.

Norwegian adjectives, like those of Swedish and Danish, inflect for definiteness, gender, number and for comparison(affirmative/comparative/superlative). Inflection for definiteness follows two paradigms, called "weak" and "strong", a feature shared among the Germanic languages.

There is also another definite marker den (den for masculine and feminine, det for neuter) that has to agree in gender with the noun when the definite noun is accompanied by an adjective. It comes before the adjective.

By comparison, Scandinavian languages usually form adverbs from adjectives by using the grammatical neuter singular form of the adjective. This is in general true for both Bokmål and Nynorsk.

Det er grusomt (It is terrible)

Norwegian personal pronouns are declined according to case: nominative/accusative. Like English, pronouns in Bokmål and Nynorsk are the only class that has case declension. Some of the dialects have also preserved some form of the dative in nouns.

Norwegian verbs are not conjugated for person or number unlike English and most European languages, though a few Norwegian dialects do conjugate for number.

Norwegian verbs are conjugated according to mainly three grammatical moods: indicative, imperative and subjunctive, though the subjunctive mood has largely fallen out of use and is mainly found in a few common frozen expressions.

Indicative verbs are conjugated for tense: present/past/future. The present and past tense also have a passive form for the infinitive.

Norwegian word order - SVO - is generally more like English than German. However, if an element is fronted (moved to the first position in the sentence) it displaces the subject, which moves behind the verb.

Norwegian has a complex system of prepositions that may also be used differently in different dialects. Unfortunately, there is no rule that will help you master them: they can be mastered through regular practice only.

This is a very brief overview of Norwegian grammar. To truly master it, you will need to study each of the parts of speech in much more detail. However, this overview will hopefully give you a general idea of the Norwegian grammatical system and of the main points you should consider when learning. 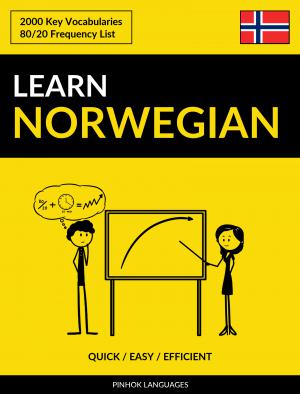 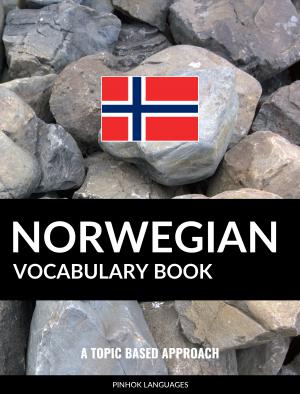 At Pinhok Languages we concentrate on vocabulary acquisition through vocabulary books and flashcards. To provide you with an additional option, we have partnered with norwegianclass101.com. By clicking on our partner link you can sign up for a free account and start learning using various formats like audio, video, flashcards, articles and even 1:1 teaching.
Learn More