Learning Russian may be challenging but it can also be truly rewarding as well. If you aren’t afraid of a challenge, here are some great reasons to learn Russian.
< Learn Russian

1. Russian Is One Of The World’s Most Spoken Languages

It is also quite widespread all over the world. Apart from Russia, Russian is spoken in many countries. It is the official language of Belarus, Kyrgyzstan, and Kazakhstan. In many former Soviet Republics (such as Azerbaijan, Estonia, Georgia, Latvia, Lithuania, Moldova, Tajikistan, Turkmenistan, and Uzbekistan) a considerable amount of people speak Russian. Furthermore, a considerable number of Russian expats can be found in the USA, Germany, Switzerland, Hungary, Mongolia, Poland, and Israel.

2. It Gives You Great Opportunities for Travelling

As mentioned above, Russian is spoken in quite a few countries. And although you do not absolutely have to learn Russian to go there (you can get by with some English and a translator app), some knowledge of Russian will allow you to communicate beyond asking the most basic questions and have a deeper and richer travelling experience.

3. Knowing Russian is Good for Your Business and Employment Chances

Despite some political restrictions, Russia is a powerful economy with a lot of opportunities. Learning the Russian language can provide you with opportunities to work in or with Russian-speaking regions. You can get a job in Russia, find a Russian business partner or simply make your CV more attractive with an internship in a Russian-speaking country.

The population of Russia is over 140 million people. There are people of various creative professions, expert scientists, world-class professionals, and just fun and interesting people to get to know, share knowledge and become friends with.

5. Immerse Yourself in a Rich Culture

Russia has given the world many great writers, artists, scientists, and musicians. It is rich in culture and traditions. And there is no better way of immersing yourself into the culture than learning the Russian language.

6. Challenge Yourself and Boost Your Brain

Learning Russian can be a true challenge. One of the biggest difficulties are Russian inflections: the endings of words changing depending on their relation to other words in the sentence. For instance, Russian nouns have six cases (both for singular and plural form, that’s 12 different endings to memorize).

However, this may make mastering the language all the more rewarding. It is also a great exercise for your brain, training your memory and various cognitive skills.

When you learn a bit of Russian, a number of other languages become more accessible to you. Russian is a member of the Indo-European language family, and specifically the Slavic branch. Even with just a beginner’s grasp of Russian, you can understand the other Slavic languages much easier.

As you can see, Russian is not an obscure language of a distant country. It is one of the world languages, spoken in countries with great opportunities, interesting people and rich cultures. Learning it will open up a large part of the world to you. 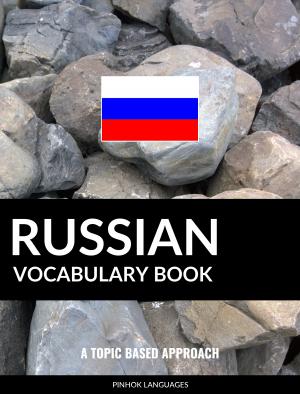 At Pinhok Languages we concentrate on vocabulary acquisition through vocabulary books and flashcards. To provide you with an additional option, we have partnered with russianpod101.com. By clicking on our partner link you can sign up for a free account and start learning using various formats like audio, video, flashcards, articles and even 1:1 teaching.
Learn More