The Thai alphabet has most likely been derived from, or at least influenced by, the Old Khmer alphabet. According to tradition, it was created in 1283 by King Ramkhamhaeng. The Thai script is the abugida used to write Thai, Southern Thai and many other languages spoken in Thailand.
< Learn Thai

An abugida is a segmental writing system in which consonant-vowel sequences are written as a unit; each unit is based on a consonant letter, and vowel notation is secondary. This contrasts with a full alphabet, in which vowels have status equal to consonants.

The Thai alphabet itself (as used to write Thai) has 44 consonant symbols, 16 vowel symbols that combine into at least 32 vowel forms, and four tone diacritics to create characters mostly representing syllables.

As the Thai script is an abugida, only consonants are represented by the full characters, with diacritical marks for vowels; the absence of a vowel diacritic gives an implied 'a' or 'o'. Consonants are written horizontally from left to right, with vowels arranged above, below, to the left, or to the right of the corresponding consonant, or in a combination of positions.

For some consonants, there are multiple letters. Originally, they represented separate sounds, but over the years the distinction between those sounds was lost and the letters were used instead to indicate tones.

8 of the letters of the Thai script are used only for writing words of Pali and Sanskrit origin.

In writing, there are no spaces between words, instead, spaces in a Thai text indicate the end of a clause or sentence. Occasionally, minor pauses in sentences may be marked by a comma, and major pauses by a period.

Thai letters do not have small and capital forms like the Roman alphabet.

As you can see, Thai writing differs a lot from the Latin script that is used by most Indo-European languages and some other languages of the world. Due to this fact, it may seem hard, but just as any alphabet or any other type of script, it can be mastered with a bit of patience and ample regular practice. 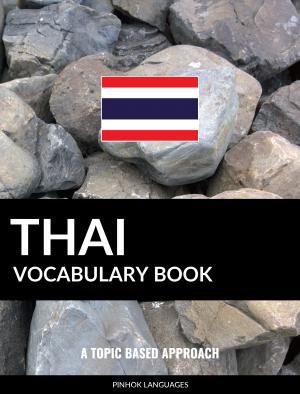