Turkish grammar, in general, is pretty straightforward and not too hard to master. However, it has a few peculiarities that can cause difficulties to learners of Turkish as a foreign language.
< Learn Turkish

Turkish is a highly agglutinative language, meaning that much of its grammar is expressed by adding various suffixes to nouns and verbs. It is very regular compared with many European languages. For example, evlerden "from the houses" can be analyzed as ev "house", -ler (plural suffix), -den (ablative case, meaning "from"). One word can have many affixes and these can also be used to create new words, such as creating a verb from a noun, or a noun from a verbal root. The extensive use of affixes can give rise to long words.

This article gives an overview of Turkish grammar, its general structure and some of the aspects you need to pay particular attention to.

Turkish nouns decline by taking case endings, with all the endings following vowel harmony. For example, köy (village) is nominative and köye is dative. The plural marker -ler immediately follows the noun before any case or other affixes (e.g. köylerin "of the villages").

Additionally, nouns can take suffixes that assign person: for example -imiz, "our" which can be used like ev (house) – evimiz (our house).

There is no definite article in Turkish, but definiteness of the object is implied when the accusative ending is used.

Turkish adjectives are not declined. However, most adjectives can also be used as nouns, in which case they are declined: e.g. güzel ("beautiful") – güzeller ("beautiful ones / people"). The adjectives in Turkish usually precede the nouns they modify.

Many adverbs are derived from verbs by the means of suffixes (such as –e, -erek, -meden and others).

Many adverbs are also formed from adjectives, simply by adding the suffix –ce to the adjective or using the word “bir şekilde” with the adverb.

Some words can be used as an adverb without using any suffixes.

Like Turkish nouns, pronouns have no grammatical gender (the same pronoun o means "he", "she" or "it"), but have six grammatical cases.

The third-person personal pronoun o "she/he/it" is declined as if it were the noun "on". The other persons, ben "I", sen "you (singular/informal)", biz "we", siz "you (plural/formal)", are declined like nouns, except for a vowel change in the dative, and an anomalous genitive; also the plural forms do not involve –ler (for instance, ben “I” – biz “we”).

Turkish verbs indicate person. They can be made negative, potential ("can"), or impotential ("cannot"). Furthermore, Turkish verbs show tense (present, past, future, and aorist), mood (conditional, imperative, inferential, necessitative, and optative), and aspect. Negation is expressed by the infix -me- immediately following the root of the verb.

Verbs also have a number of participial forms, which Turkish makes much use of. Clauses which begin with "who" or "because" in English are generally translated by means of participial phrases in Turkish.

In Turkish, verbs generally come at the end of the sentence or clause; adjectives and possessive nouns come before the noun they describe; and meanings such as "behind", "for", "like/similar to" etc. are expressed as postpositions following the noun rather than prepositions before it.

Strictly speaking, though, Turkish has not prepositions, but postpositions, as they follow the noun they modify. For example:

This is a very brief overview of Turkish grammar. To truly master it, you will need to study each of the parts of speech in much more detail, paying special attention to various suffixes expressing a multitude of grammatical forms. However, this overview will hopefully give you a general idea of the Turkish grammatical system and of the main points you should consider when learning. 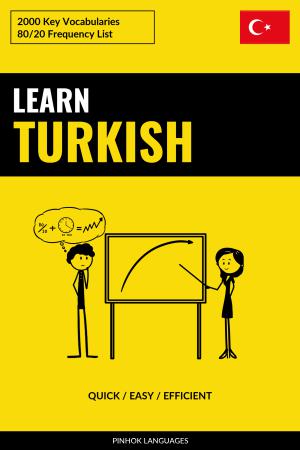 On our partner platform Flashcardo you can find Turkish flashcards to practice online for free ordered by topics and frequency of use, similar to our two vocabulary books above.
Learn More

With this downloadable product you get all Turkish flashcards available on Flashcardo.com in various formats for you to use. In detail you get 1 EPUB ebook, 2 PDF vocabulary lists and 8 printable flashcard PDFs.
Learn More