The path to a finished book

For the first book, it took 4 years from idea to market. Today the process of creating vocabulary books for new languages is more streamlined and quicker, but still involves a lot of manual work and checking. Join me on a quick run through the various stages from start to finished book available for sale.

There is a basic set of words and phrases that’s used as basis for step two, the translation by native speakers. The word list is kept in English and was put together throughout the first two years after the initial idea.

Words for the list were gathered through various channels including e.g. Wikipedia, supermarkets, online platforms and existing learning material. The list was checked over and over again to make sure nothing major was missing as adding words in later stages would be very costly and demand great effort.

Phrases were built with simplicity as the main goal. The phrases should contain the main grammar patterns of a language while only containing simple words learners would learn early on anyway.

Starting out with a new language, the first thing to do is look for native speakers that can take over the work of translating the main list of words from English into the new language. Fiverr is the place to go for me for this task as it’s a great platform with a simple concept that’s very fitting for translation projects.

The native speakers take the Excel list with the English words and phrases, charge the price they charge based on their rates and usually after 1-2 weeks get back to me with a finished translation and some questions. Both translations are subsequently put together into one Excel sheet for manual checking.

In the end what I end up with are 5 columns of translations in the new language for each of the roughly 3800 words and phrases. Next, I use Excel to compare each of the translations with each other. The resulting spreadsheet would look something like this: 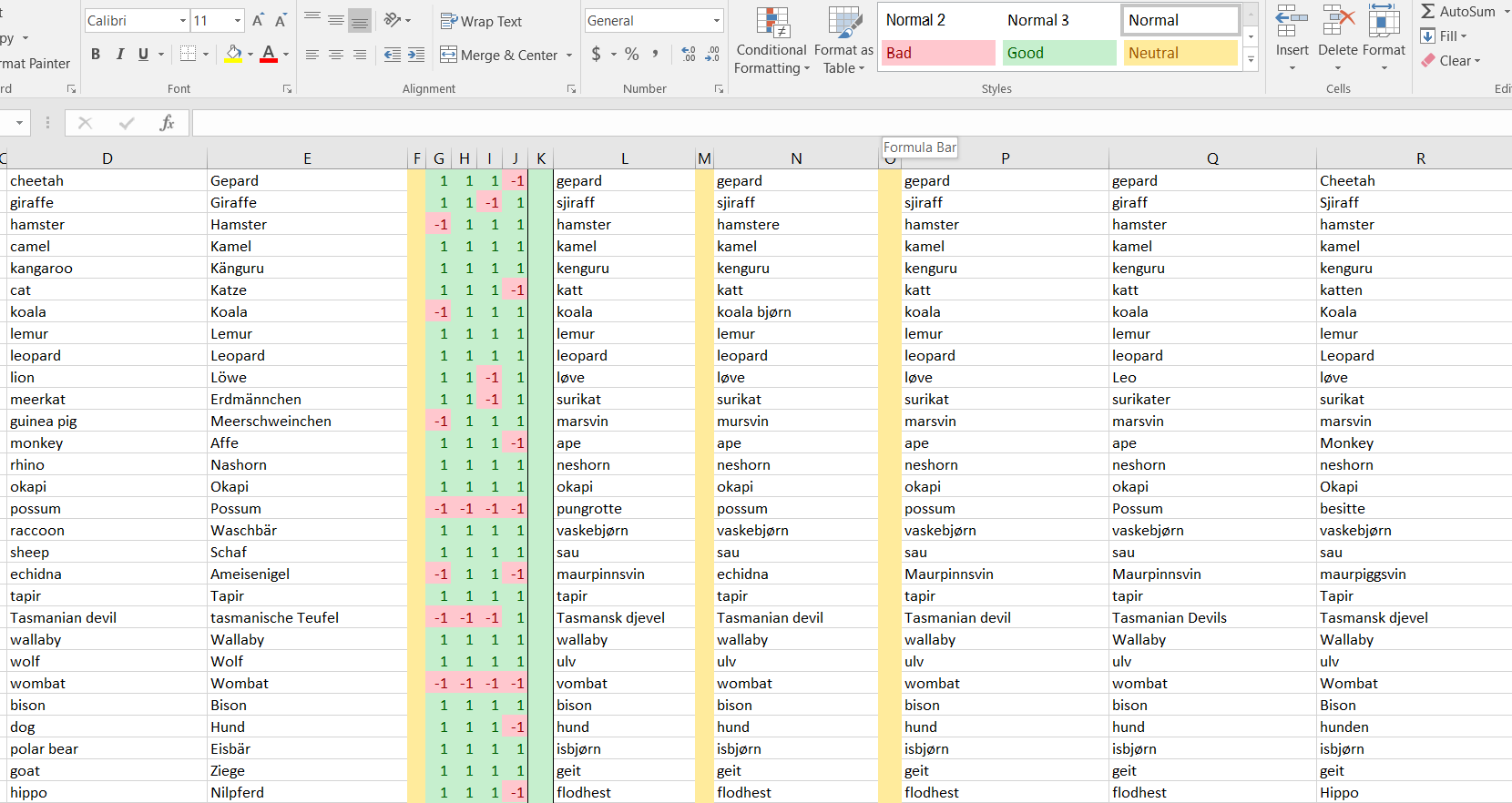 Now the real work starts and this step is also the reason why I share this with you as I don’t think any sane person would put himself or herself through that process of manually checking 3800 words one by one.

I then use resources like online dictionaries, Google Image search, Wikipedia, Google, Bing or other online material to figure out what the best translation for that English word should be in that language. For some words this gets particularly difficult, as some languages lack 1-to-1 translations for some terms that are common in English or German.

Working through the document like this is very tiring and work like this is usually limited to 2-3 hours per day (max). All in all it usually takes a total of roughly 20 hours of manual checking and fixing to make it through to the end.

Manually checking all words is followed by a couple of automated tests e.g. for duplicated use of certain words that might indicate errors. After that, the words are loaded into the internal database and are ready to be used for publishing.

The process of creating the material that would subsequently be published to lead to books on sale is semi-automated in that I still need to feed in certain information like titles and description that change from language to language. Once that is all set up, the material gets created and after a final quality check on the finished material itself, it’s ready to go out to the publishing platforms.

The publishing process is very straight forward in that it mainly consists of uploading material and information to the three platforms I’m using (Amazon KDP, Createspace and Smashwords). This is a great activity for times when my head needs a break from programming and thinking and due to its monotonous nature could almost be described as having a meditative touch – and of course the feeling of having a product show up online is just fantastic time and time again.

As you can see, creating vocabulary books for a new language and getting them out is no rocket science but still involves quite a bit of manual work. I wanted to write this article to on the one hand show that anybody can do something like this, on the other hand, however, also to show that a lot of effort goes into the material published by Pinhok Languages and that I do my best to achieve the highest quality possible.

Wolfgang Geiger is the founder behind Pinhok Languages and the main force that keeps this project going. Wolfgang was born in Austria but is currently living in and working out of Hong Kong. He discovered his love for languages when he started learning Mandarin in 2010. Today he’s fluent in Mandarin and passionate about helping other people learn any language they want quicker and more efficient. If you want to get in touch with Wolfgang, use the contact form, he’ll be happy to help wherever he can.