A list of frequently asked questions concerning Slovenian and learning Slovenian. If you don't find the answer to your question, please get in touch, we're happy to help!
< Learn Slovenian

Where is Slovenian spoken?

Slovenian or Slovene is a South Slavic language spoken mainly in Slovenia. It’s also spoken in parts of Italy, particularly in Friuli Venezia Giulia; in Austria especially in Carinthia and Styria; in Vas in Hungary, and in Croatia.

As a result of migration at the beginning of the twentieth century, Slovenian can also be heard in Ohio, USA, and in South America. Other countries with Slovenian speaking minorities are Serbia, Canada, Australia, and South Africa.

How many people speak Slovenian?

Slovenian is spoken by around 2.5 million people. 2.1 million native speakers live in Slovenia, the rest in Slovenian minority communities all over the world, including the USA, Canada, and Australia.

What makes Slovenian difficult to learn?

The difficulty of Slovenian as a foreign language depends on your native language. As a Slavic language, it may be relatively easy for native speakers of other Slavic languages to master, while it is harder for non-Slavic speakers.

There are a few things that may make Slovenian hard to learn: a complex grammar with a lot of inflections including six cases and three numbers (singular, plural, dual); a great number of dialects that differ from each other significantly; hard to pronounce consonant clusters.

On the plus side, the language is mostly written as it is spoken, with very few irregularities.

Is Slovenian a Slavic language?

Yes, it is. In fact, Slovenian is the oldest written Slavic language.

How similar are Slovenian and Croatian?

Slovenian belongs to the same South Slavic language family as Croatian, or Serbo-Croatian, as it is also known. As common for languages from the same group, there is some shared vocabulary and some similarities in the grammatical structure.

However, these are two distinct languages quite different from each other by their unique grammar, vocabulary, and pronunciation. In fact, most people in Croatia and Serbia have difficulty understanding Slovenian.

The opposite, however, is not always true. Slovenes born before 1980 are likely to understand and are even able to speak some Serbo-Croatian. Their exposure to it was considerably higher as the vast majority of TV programs that were aired throughout the country were in Serbo-Croatian. Serbo-Croatian also used to be a compulsory subject at school during that time. 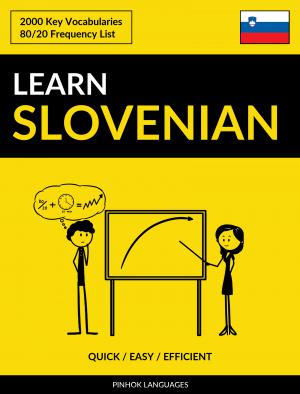 This vocabulary book is a curated Slovenian word frequency list with 2000 of the most common Slovenian words and phrases. Following the Pareto principle (80/20 rule), this book is built to streamline the learning process by concentrating on the core words and sentence structures. The result is a unique book ideal for driven learners and language hackers.
Learn More 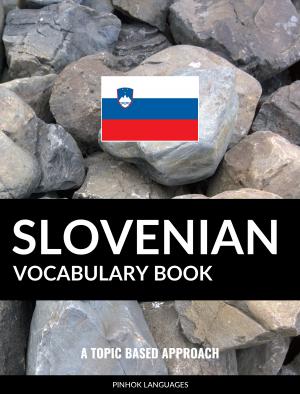 This Slovenian vocabulary book contains more than 3000 words and phrases and is organized by topic to make it easier for you to pick what to learn first. It is well suited for learners of all levels who are looking for an extensive resource to improve their vocabulary or are interested in learning vocabularies in one particular area of interest.
Learn More